Freeman Vines has been building guitars for fifty years, and no two of them are alike. While a commercial guitar company like Gibson or Fender seeks uniformity in their instruments, Vines seeks singularity. He doesn’t force his raw material into a predetermined form. Instead, he follows its lead. He closely considers the unique qualities of the wood and allows his own artistic spirit to connect with its character and its history.

This material might be an old mule trough, a torn down tobacco barn, or a broken piano. Or it might be a hanging tree.

Vines was born in the 1940s in Greene County, North Carolina, not far from where he lives now in the small town of Fountain. He was the oldest surviving son in a family of 11. His mother was a sharecropper and after three years of school he quit to help her in the fields. These were some of the same fields worked by his enslaved ancestors who were brought to this area in the early days of British colonialism, more than 300 years ago.

Growing up in the Jim Crow era in the rural South, Vines was surrounded by racism. As a teenager, he got in trouble with the law for selling moonshine. His white partners-in-crime were released, but Vines went to jail. He spent years in both juvenile and adult prison facilities. He says that he learned to read and write in the penitentiary, and sometimes jokes—couching harsh truth in humor—“the college I went to is spelled ‘C-H-A-I-N G-A-N-G.’” 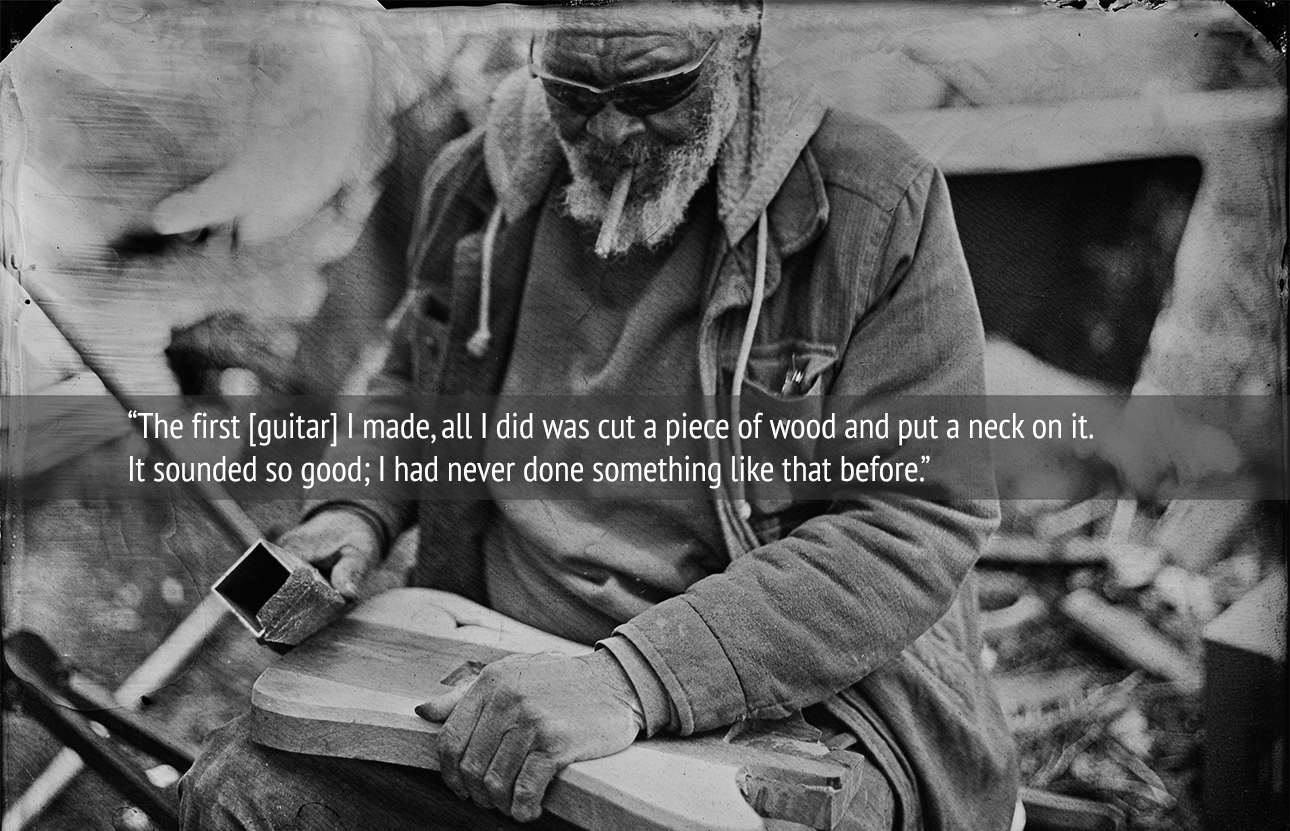 During this time, Vines became obsessed by a sound. It was something he had heard. Maybe a guitar riff in a church, or a mysterious howling at night. It was a sound with its own kind of force, drawing him to it. He wanted to bring it out of a guitar. But the mass-produced guitars he had played weren’t up to the task. “All the sounds to me were commercial,” he says, “plain, dang, ding, dong.” So he set out to build the sound himself.

That was the beginning of a long journey. Using materials from his surroundings, he built one guitar after another. Each one was different: different shapes, different hollowed-out tonal chambers, different configurations of electronics. Vines amassed a totally unique body of work as he searched for his sound. “The closest I found,” Vines recounts, “was a piano soundboard, and I said, this is the closest I’ll ever come. That’s when I kind of gave up looking for a tone.”

He didn’t stop building guitars, though. In abandoning the quest for the perfect tone, Vines granted himself more artistic freedom in the design of his guitar bodies, sometimes creating works that were more sculptures than musical instruments. The inspiration from the material itself became even more palpable. In many of his creations, Vines says he simply worked the wood to reveal what was already there. 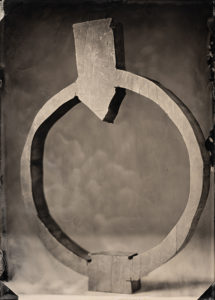 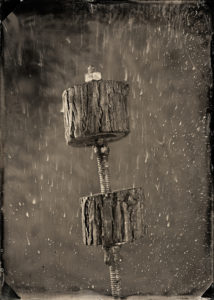 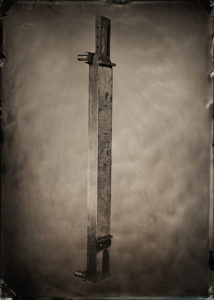 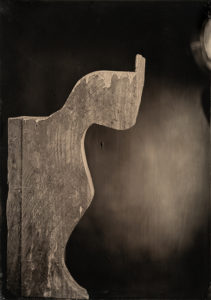 By 2015, Vines’ work had slowed considerably as a result of his poor health. This was when Tim Duffy—founder of the Music Maker Relief Foundation—met him. As a folklorist, photographer, and head of the Music Maker Foundation, Duffy had decades of experience working with brilliant artists who had deep roots in the oldest African American traditions. However, he instantly recognized Freeman Vines as something special.

As Vines brought out his guitars, Duffy was flabbergasted. The designs were unlike anything he had ever seen, but more than that, there was an unmistakable harmony between the instruments, the land, and Vines himself.

It was on this first visit, with Duffy reeling from his encounter with this powerful work, that Vines showed him the hanging tree wood. He had acquired three planks of black walnut wood from an old man who told him it was from a hanging tree. Vines had not even tried to build anything with it yet.

The Foundation helped Vines access health care that he needed. Before long, he was regularly working on new guitars. As Duffy continued to visit, he realized more and more that Vines was not just an artist, but a philosophical man with a deep feeling for history, a powerful connection to the land, and a complex sense of spirituality. Vines expressed this all in his own highly poetic language. He talked often about the hanging tree wood.

Vines completed his first guitar from this wood in 2017, about two years after meeting Tim Duffy. Duffy said, “When he mentioned the hanging tree guitars, I was too scared. I was almost too scared to take the project on. I didn’t think I had a right to do it. I thought I was crossing in territories where a white person wasn’t allowed to go.”

But Vines was gripped by the project. As he worked with the wood, he wasn’t just making interesting guitars, but reaching back to the past, bringing history to life, and recovering stories that were crying out to be told. Duffy and others, including folklorist Zoe Van Buren, joined Vines on a quest to better understand the origins of these stories. Their research led them to accounts of Oliver Moore, a 29-year-old black man who had been lynched in 1930 just a few miles from where Freeman Vines was currently living in Fountain.

“Any tree could be a hanging tree, but that tree there had a purpose.

More than one man had been hung on that tree.” 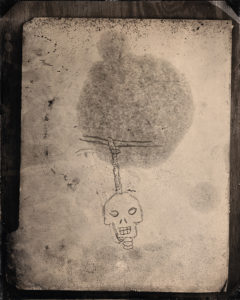 Oliver Moore’s lynching was widely covered in the press when it happened. However, no one was ever convicted of a crime. White people were scared that they would be seen as traitors if they turned someone in. Black people were scared that they would be next. Silence hung in the air like a dark cloud and persisted for decades. There was never closure. Even as Freeman Vines worked on the hanging tree guitars in 2017, there were older people around Fountain who still remembered Moore’s lynching. Some had family members who were involved. But people rarely spoke openly about it.

If humans struggle to communicate openly and reckon with the past, the land nevertheless holds the memories. For Freeman Vines, the spirit that animates human souls also lives in the land and the trees. The hanging tree held the story. And not just the facts of the story, but its emotional and spiritual complexities as well. His work was revealing all of this, and boldly breaking the code of silence that had reigned in the community for so many decades.

As Vines completed his works from the hanging tree wood, he, Duffy, and Zoe Van Buren worked together to create a book entitled Hanging Tree Guitars. Van Buren extracted passages from hours and hours of recorded conversations and presented these in such a way to allow the story of the hanging tree guitars to emerge through Freeman Vines’ own unique poetic voice. Accompanying this text are some of Duffy’s tin type photographs (a striking form of photography that dates back to the 1800s) of Vines, his guitars, and his surroundings. This book set the stage for the current exhibit and is a companion to it. 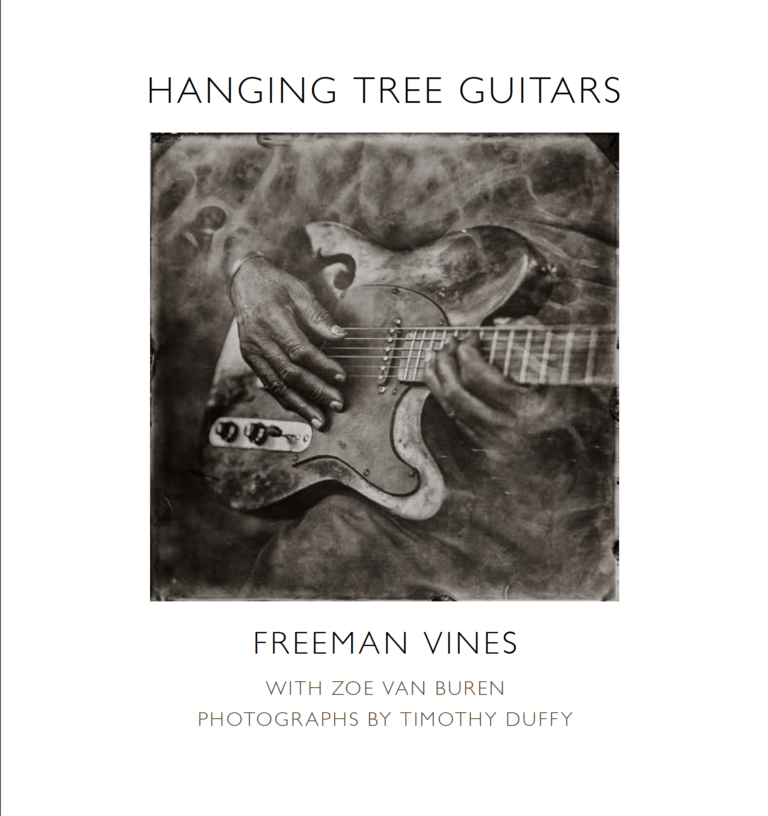 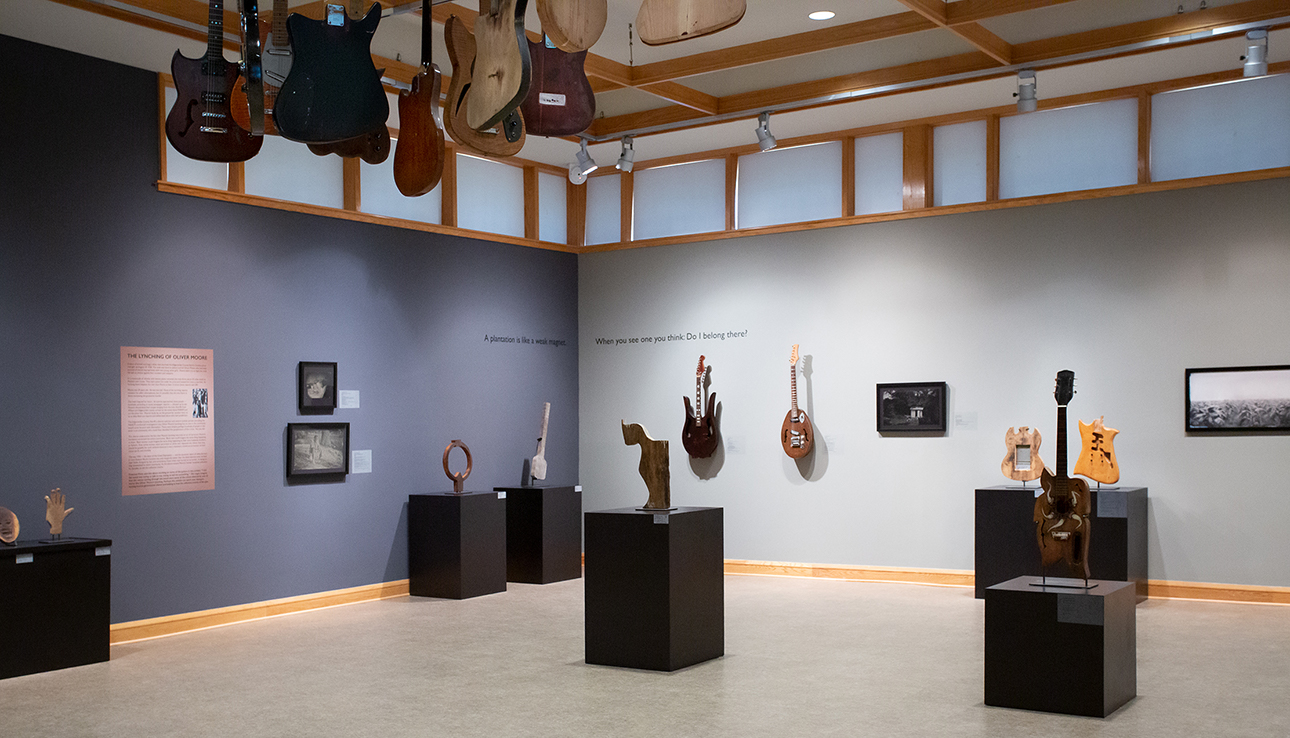 The exhibit allows visitors to directly experience Freeman Vines’ creations. Some of Tim Duffy’s photographs also feature in the exhibit to provide another layer of perspective on Vines’ art and the rural setting that inspires it. Additionally, the exhibit offers visitors some of Vines’ own philosophical and poetic commentary and situates his work in a deeper cultural and historical context.

Ultimately, Hanging Tree Guitars zooms in on only a small part of Freeman Vines’ body of work. For around fifty years, he has been a prolific guitar builder and artist. This particular collection, however, provides a stark example of just what a masterful artist he is.

As Zoe Van Buren writes in the afterword to the Hanging Tree Guitars book, these instruments “offer an unsettled—and unsettling—look into how history is written into the land and the mind. The stories that Vines tells of labor, violence, cross-racial entanglements, and spiritual resistance are stories that define the history of the South itself.”

Hopefully, visitors to Hanging Tree Guitars will find that this exhibit is just a starting place; a portal that can lead to further explorations of Vines’ work, and the work of African American artists in the South more broadly. Perhaps the work in this exhibit can also lead visitors to reflect on themselves and all the ways that they are connected to others and to the land, both in the past and in the present. Maybe it can even lead to dialogue about these things. 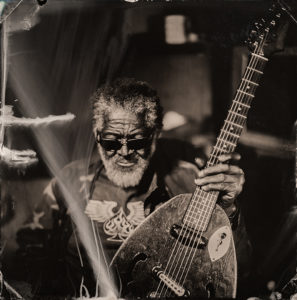 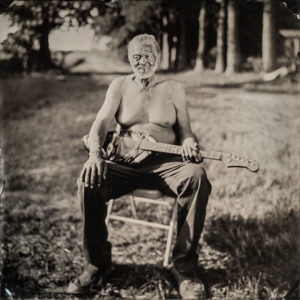 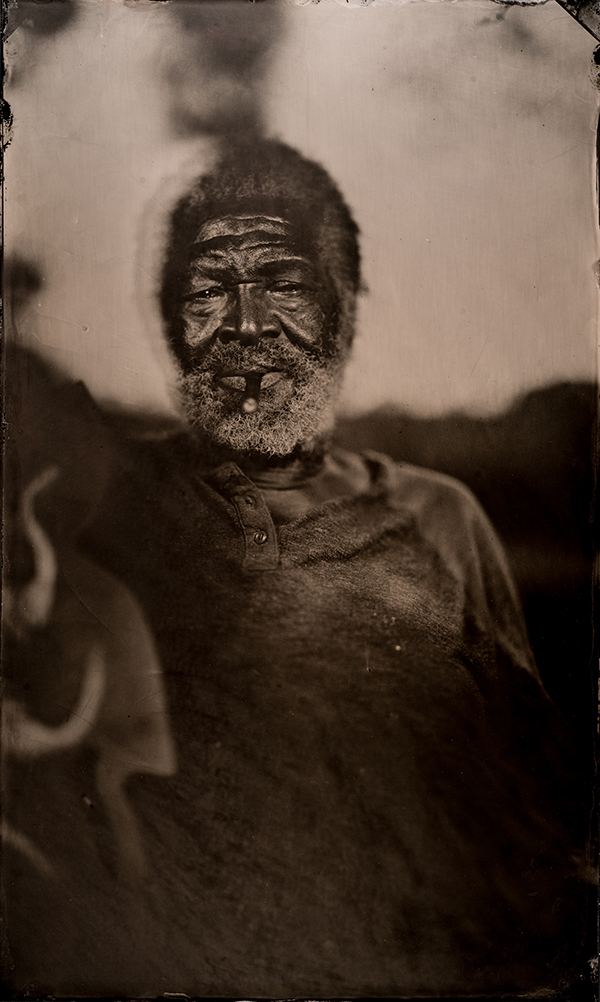 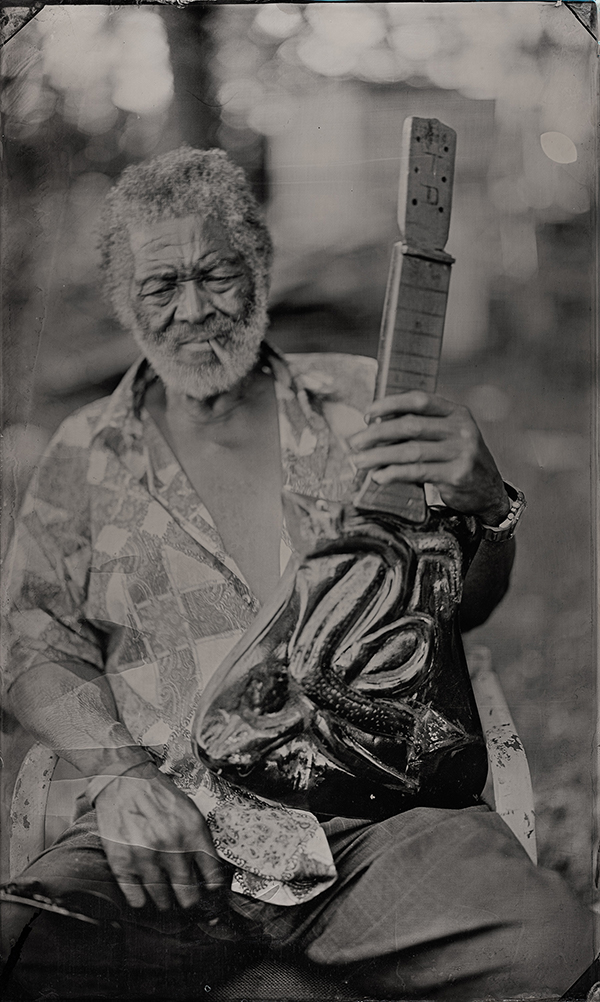 Finally, while this exhibit is full of heavy, and even dark, content, hopefully visitors will not lose sight of the joy that is also here. The dark can’t exist without the light. For all of Freeman Vines’ intensity, he’s also a funny man, full of dry wit. When he puts his gifts to work, there is an element of fun, even playfulness, in how he transforms his material into a finished product. It is, after all, guitars that he makes, instruments intended to create harmony and bring music into the world.